Ferries In Italy: Commitment To The Environment Still A Mirage According To The NGO ‘Citizens For Air’

The Italian NGO ‘Citizens for Air’ (Cittadini Per L’Aria) has analyzed the environmental commitment of 32 shipping companies operating in Italy, stating that too little is being done.

Only 4 out of 174 ships taken into consideration have already adopted systems to reduce polluting emissions, while only four less polluting ferries are under construction.

Slightly more than 2% of the total fleet navigating has implemented measures to protect the people’s health and the environment.

Citizens for air asked the ship-owners operating maritime passenger transport and ro-pax in Italy, what actions are taking or planned to improve the environmental performance of their fleets. The resulting analysis is included in a report (in Italian) highlighting criticalities and possible solutions.

“The vast majority of the 32 companies surveyed, some of which also reach or come from ports in other Mediterranean countries, are taking no measures at all to make their ships less polluting, while ship-owners who started investing to make their ferries more sustainable can be counted on one hand” is written in the report. “A paradoxical situation given that a group of these ship-owners receives over 250 million euros each year of public subsidies to carry out the passenger transport service”.

Citizens for Air underlined also that only Grimaldi Group is already operating two ferries that can have zero their emissions at berth using onboard batteries, and reduce the emissions during navigation thanks to scrubbers, the same exhaust gas abatement system adopted by the VIZZAVONA of Corsica Linea. While Caronte & Tourist is operating an LNG-ready ferry. As for the future, two new LNG-ready ferries are now being built in China for Tirrenia. 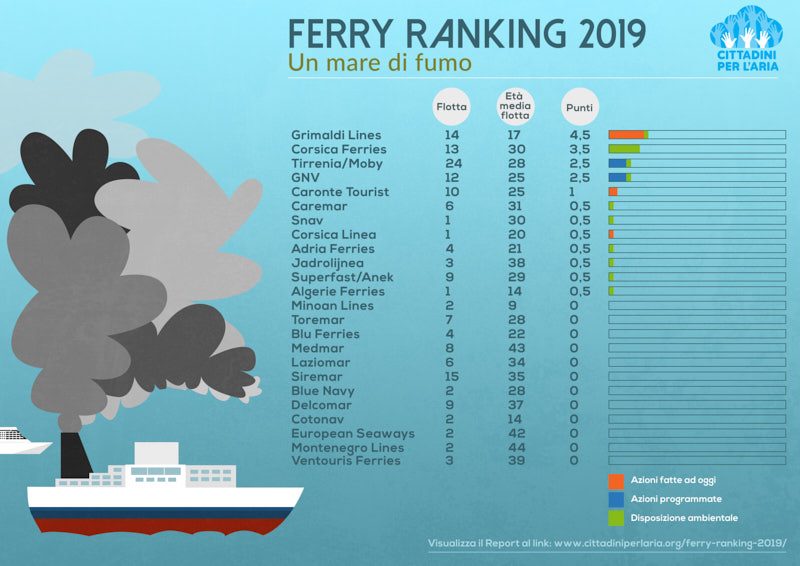 In its quarterly report, the NGO analyses the ship recycling.

This year is special, because of the European Regulation No 1257/2013 on ship recycling, which entered into force on 1 January 2019. It applies to ships flying the flag of a Member State which must now be scrapped in an approved yard. The number of approved yards increased from 26 to 34. Two Danish, five Norwegian and one Turkish yards have been added.